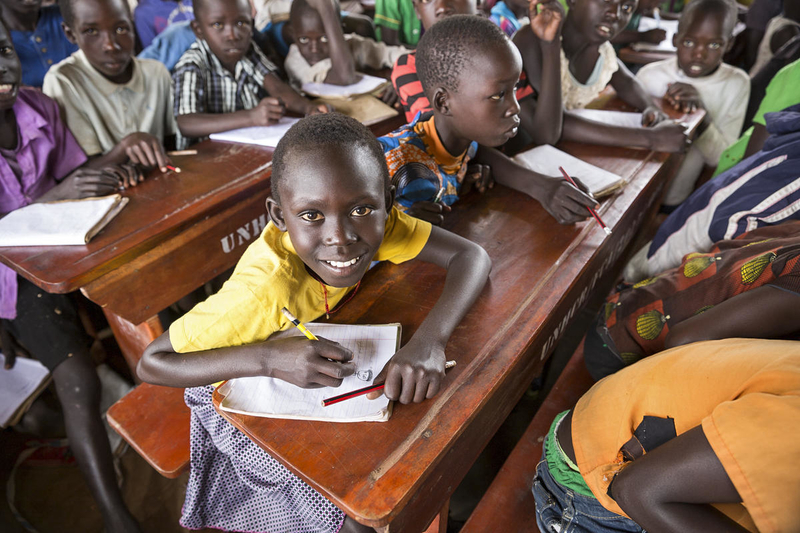 “Education must be part of the first response to any crisis or conflict.”

The UN Refugee Agency (UNHCR) estimates that 4 million refugee children between the ages of 5 and 17 worldwide aren’t enrolled in school. Among refugee children of primary-school age, 61 percent are getting an education, compared to 92 percent of children globally. As children get older, the gap widens, with only 23 percent of secondary-age refugee children attending school. In Cox’s Bazar in Bangladesh, 97 percent of Rohingya adolescents and youth (ages 15 to 24) lack access to any kind of formal or informal education.

These startling trends have an enormous impact on children’s growth, development, mental health, and lifelong cognitive function. Not only does being a refugee take a toll on young bodies, it can be extremely detrimental for young developing minds, and on future educational outcomes.

Why isn’t education a given?

Too often, education is seen as a luxury or “added bonus” alongside meeting immediate physical needs like food or medical care. This narrow view of the role of education in a child’s life can be dangerous. In addition to being the right of all children and a path to future opportunity, education is a powerful tool in supporting the psychosocial well-being of children who have lived through tragedies and traumas, lost loved ones, and have had their lives disrupted unjustly.

“Education is not only a right, it is a lifesaving intervention,” says Kerin Ord, Sector Leader for Education with World Vision International. “Children and their families consistently say their main concerns during disasters are education and protection.” This is critically important when it comes to neurocognitive development in infancy and early childhood (0-8 years). Children who experience repeated, high levels of stress from conflict, extreme poverty, abuse, the death of loved ones, or other distressing events often have less developed prefrontal cortexes, which control many critical executive function abilities such as impulse control, reasoning and decision-making, and working memory.

The benefits of education

Thankfully, resilience skills can be learned, and many times they are learned in a classroom setting. Being resilient does not mean that children won’t experience difficulty or distress, but positive, stimulating environments can support recovery. For children who have lived through natural disasters, conflict, or forced migration, school can provide routine, order, and a sense of control. School is often where children begin to regain normalcy and where their brains grow and mature due to positive stimulation from course material and from the students and teachers around them. Through learning, relationship-building, and play, a sense of hope and safety is restored, which is critical for resilience.

Staying in school can also protect children from future harm. Oftentimes, harmful social and cultural norms are exacerbated in times of immense stress and economic hardship. Protracted crises and conflicts leave many parents with limited financial resources and few opportunities for their children’s future. As a result, out-of-school children are vulnerable to multiple forms of violence including exploitative child labor, trafficking, assault, rape, and/or early or forced marriage. For example, a survey of Syrian refugees living in Lebanon in 2017 showed that child marriage rates were four times higher among refugees than they were in Syria before the war.

Schools can also function as community hubs where immediate lifesaving information is shared. For example, children may learn about their rights to say “no” to child marriage, how to prevent illness or disease, how to recognize human trafficking, or how to report violence in their community.

Finally, education is a strategic investment in anticipation of children’s roles in rebuilding their countries post-disaster. Children will grow up to contribute both to the societies that host them and to their native countries, when peace allows them to return. That is why education is one of the most important ways to solve the world’s crises. Estimates vary, but the average length of time a refugee will be displaced today is between 10 years and 26 years — a period that often extends over an entire childhood and beyond. Long displacement poses an imminent threat to the restoration of countries, but education and investments in future leaders are investments in future peace and stability.

Over the past five years, Uganda received more than a million refugees from South Sudan and the Democratic Republic of Congo. War, conflict, and drought forced many families and unaccompanied children to flee their home countries and settle in one of 11 Ugandan camps. Young children and girls have been some of the most vulnerable during this migration.

In 2017, World Vision, in partnership with UNICEF, received funding from Education Cannot Wait, a global fund that aims to transform the delivery of education in emergencies, to operate six “Hope for Children” Early Childhood Development Centers in the Imvepi refugee settlement in Uganda’s Arua District. Around 5,000 girls and boys are now enrolled in World Vision’s educational centers. In these programs, young refugee children, like 5-year-old Juma, have been reached with psychosocial support and early learning activities to build pre-literacy and pre-numeracy skills.

“In South Sudan, I was not going to school but when we came here, the school was near and my father brought me here and I joined the top class,” says Juma.

These classrooms also provide safe, age-appropriate play environments, which are vital for the well-being and healthy development of children. The learning activities and opportunities for play support the well-being of young children as they overcome the effects of adverse experiences.

In December 2019, the international community convened in Geneva at the first ever Global Refugee Forum (GRF). At this gathering, World Vision pledged to ensure the youngest refugee children — including those with disabilities — receive quality education and get off to a good start. We promised to work harder to continue to meet the unique learning and development needs of children like Juma, who have had their lives disrupted by war and conflict. In at least 12 countries, World Vision has committed to deliver quality, family-centered, sustainable Early Childhood Development and Education programming by 2023. These programs will align with global and national frameworks and standards, like the Nurturing Care Framework and the INEE Minimum Standards for Education.

As World Vision shifts its focus to a greater emphasis on fragile contexts, we are adapting the way we program and fundraise to meet the challenges of working with the most vulnerable, including children on the move.

What the U.S. Government is doing to improve refugee education

Despite the lifesaving nature of education, it is grossly underfunded and underprioritized by donors and governments. In 2017, education in emergencies only received 3.8 percent of sector-specific global humanitarian funding.

However, in the recently signed Fiscal Year 2020 appropriations bill, Congress included funding for Education Cannot Wait (ECW) for the first time. Launched in 2016 by international humanitarian and development aid actors, along with public and private donors, ECW is a global fund dedicated to education in emergencies. ECW partners directly with program implementers to foster a more collaborative approach among actors on the ground, ensuring relief and development organizations join forces to achieve education outcomes.

Although the United States has made financial commitments to ECW in the past, this is the first time Congress has pushed for a specific dollar amount ($25 million). The U.S. contribution to ECW will support global efforts to reach the most vulnerable in times of conflict and crisis and to achieve inclusive and equitable quality education and promote lifelong learning opportunities for all.

How you can help

Kids like Juma and the 4 million refugee children out of school deserve our best efforts to ensure every child has the education they need. As the world’s largest humanitarian donor, we believe the U.S. government can and should do more to support children in crisis. This year, we are advocating for the inclusion of $50 million for children and youth affected by conflicts, natural disasters, and displacement through Education Cannot Wait.

Top photo: Eight-year old Doruka (yellow t-shirt) and her sister, Sejarina (blue t-shirt), 10 are lively, bright, cheeky, smiling South Sudanese girls who have been living in a refugee settlement in northwest Uganda since September 2017. The girls are top of their classes at school and popular with students and teachers. (©2018 World Vision/photo by Nick Ralph)