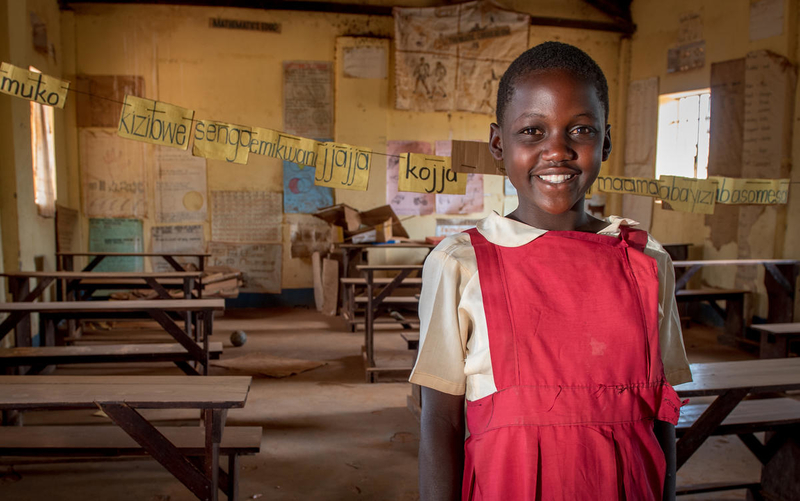 It’s not just girls whose lives can be transformed by getting an education. It’s their future children. It’s their families. It’s — this is not an exaggeration — the entire world.

The education of girls fights poverty, disease, sexual exploitation … global experts agree that educating girls is key to sustainable change. For example, the World Bank found that if Ethiopia were to end child marriage and keep girls in school, they could reduce their reliance on overseas development assistance by one sixth.

But around the world, girls are 1.5 times more likely than boys to not go to primary school. And the gap gets worse as students get older. Only 45 percent of countries have reached gender parity in lower secondary education and 25 percent in upper secondary. Around the world, 132 million girls are out of school (as of 2016).

But the benefits of girls completing their education (12 years of school or more) are overwhelming. Here are just 10 of the amazing things that can happen when girls stay in school:

Even just one year of secondary education can boost a girl’s future earning potential by up to 25 percent. And while men invest about 30 – 40 percent of their income back into their households, women invest 90 percent. Staying in school will pay dividends for a girl’s future family.

A child born to a mother who can read is 50 percent more likely to survive past the age of 5. Educating girls for six years or more leads to improved pre- and postnatal care since educated women seek better care for themselves and their children. And continuing school delays pregnancy, which means a woman will be more physically ready when she has her first child and better able to care for her baby.

Staying in school often delays the age when a girl chooses to marry, reducing the likelihood she will marry as a child. Girls who don’t attend secondary school or higher are three times more likely to marry before 18 than those who do.

According to the Global Education Monitoring Report (2017), 12 years of education for every girl would reduce child marriage worldwide by 64 percent.

4. Fewer women and girls die from pregnancy and childbirth-related causes

Early pregnancy resulting from child marriage is especially hard on girls’ bodies: About 16 million girls ages 15 to 19 give birth each year in developing countries, and complications during pregnancy and childbirth are the leading cause of death for girls in this age group. Each day, around 830 women die from preventable causes associated with pregnancy and childbirth. If girls stay in school and delay marriage and pregnancy, their risk decreases.

5. Families are stronger and healthier

Girls with more education tend to have fewer children, and those children tend to be healthier and more educated. In fact, research shows that for every year a mother goes to school, her children’s life expectancy increases by an average of 0.32 years.

Quality education gives girls more confidence, greater life skills, and can be a hub for sharing critical information about their health and rights. Fewer years of education is also associated with higher risks of intimate partner violence, affecting a woman’s physical and mental health and the well-being of her children. Educated moms are also more likely to provide better sanitation and nutrition at home, further increasing a family’s health.

6. Girls are less vulnerable to violence and exploitation

Knowledge is power, and when a girl gets an education, she is more aware of risks, her rights, and how to keep herself safe. Improving gender equality in educational systems leads to a reduction in domestic violence.

7. Education increases for the next generation

Moms who are educated are more likely to value and promote education for their children. Currently, women make up about two-thirds of the world’s illiterate population. Women who do receive a quality education are more than twice as likely to send their children to school, continuing the cycle of education and empowerment.

Increased education correlates with increased contraceptive use and less underage premarital sex, which means lower HIV/AIDS risk. In developing countries, secondary education is associated with an increase of women’s knowledge of HIV/AIDS by one fifth compared to those with low or no education.

FGM/C is the removal of all or part of the external female genitalia for nonmedical reasons. The practice can cause pain, bleeding, and swelling that may prevent urination in addition to the chronic, long-term complications. There are no benefits to the practice, and it continues despite decreasing support because of tradition and social pressure.

In most countries, women with more years of schooling are less likely to have undergone FGM/C. Quality education can empower girls by teaching them their rights, and schools can provide survivor-centered support systems for reporting violence and for psychosocial care.

10. Girls become more civically engaged, which leads to more peaceful nations, more equitable systems, and a better world for all!

Educated girls are more likely to become leaders, and when women lead alongside men the world has access to a broader array of solutions and perspectives. A one percentage point increase in a nation’s female education rate raises the average gross domestic product (GDP) by 0.3 percent and annual GDP growth rates by 0.2 percent.

According to the Global Education Monitoring Report, education builds resilience, allowing countries to more quickly recover from conflict. And if education is equitable and inclusive, it can help prevent conflict from starting in the first place. Education increases tolerance for different ideas, support for democracy, and is one of the most cost-effective strategies to tackle climate change.

“We cannot hope to achieve peaceful and prosperous societies without unlocking the potential of millions of girls denied an education. Girls’ secondary education is an investment in economic growth, a healthier workforce and the peace and prosperity of our planet.”

Why are girls out of school?

Promoting equal access to education for girls is so much more than the right thing to do. It is also the smart thing to do. Education increases global stability, child health and nutrition, and economic progress (for starters). God created men and women equally, and when we work together, we all move closer to the world he intended.

Honor her for all that her hands have done,

and let her works bring her praise at the city gate.

Top photo: Sherinah, 12, in a classroom at her school. She fought hard to remain in the class when a teacher and classmate sought to drive her away. But it was child protection club members founded by a World Vision-trained teacher, that ultimately ensured that the bullying stopped. (©2019 World Vision/photo by Laura Reinhardt)