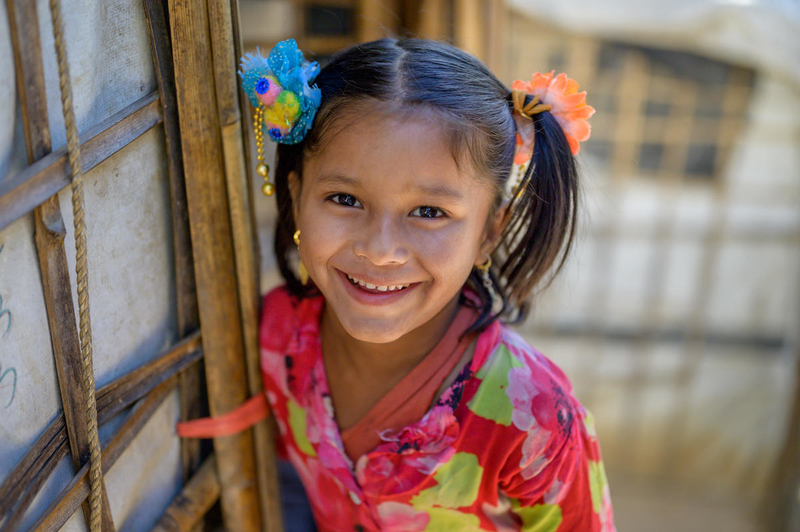 “Could your country pray that we would have peace in Myanmar?”

“She is a bit different,” says Farjana, one of Jannatul’s teachers. “She attends the Child-Friendly Space every day. She concentrates on her studies. When I teach them something, she follows me carefully.”

Jannatul and her mother Salima* are the only two left of their family. Salima’s husband and two of her three children were killed in the violence against the Muslim-minority Rohingya in September 2017. The family became separated when shooting started in their village.

“Jannatul was with me, but I didn’t know what had happened to my husband and my children,” Salima says. “Later I saw them dead.” Mohamed, 30, was shot; their son, Hafej, 2, and one-year-old daughter, Kalima, stabbed to death.

Salima and Jannatul survived by hiding by a riverbank. In the morning they joined thousands of others and fled on foot to Bangladesh.

As of May 2019, there are more than 900,000 refugees living in refugee camps in Bangladesh — more than 700,000 of those arrived in the second half of 2017, after violence escalated in Myanmar among ethnic groups and Myanmar military forces. Most of the refugees identify as Rohingya, a Muslim minority ethnic group in predominantly Buddhist Myanmar. More than half of the refugees are children.

Cox’s Bazar in Bangladesh is the world’s largest and most densely populated refugee camp. Since the refugee crisis began in September 2017, World Vision has served nearly 265,000 people in Bangladesh. We work to ensure refugees have clean water and sanitation facilities, nutrition support, reliable shelter, and hygiene kits. World Vision Child-Friendly Spaces provide a place for children in refugee camps to feel safe and continue getting an education. It’s vital work — but it’s not a complete solution.

To fully protect vulnerable populations, the world needs a strategy to prevent violence and conflict before it starts. We’re advocating for a proactive solution so that children like Jannatul won’t have to flee their homes.

Life for children in refugee camps

The Child-Friendly Space that Jannatul attends is called Surjoful, or sunflower, and was named by the children who attend every day. Two shifts of children come — about 75 younger children at 9 a.m. and nearly 100 at 11 a.m. for two-hour shifts.

When Salima and Jannatul first arrived at the camp, World Vision made sure they had a sturdy home, reinforcing their makeshift shelter with cement, tarps, and bamboo to help protect them from monsoon rains. Salima recently started working with a cash-for-work project run by World Vision in partnership with the World Food Programme. She fills sandbags for construction crews preparing the camp for the upcoming monsoon rains. Rohingya are not allowed to work outside the camp, so the money she earns as a now single mother helps buy food for Jannatul.

Salima’s thoughts about heaven are more complicated and rooted in her current situation. “Only God knows if I will go to heaven,” she says. “Heaven is like a good home. Well decorated. With many snacks for the children.”

Top photo: Five-year-old Jannatul, the sole-surviving child of Rohingya widow, Salima, carries water back to their home in the Rohingya camps near Cox’s Bazaar, Bangladesh. (©2019 World Vision/photo by Jon Warren)