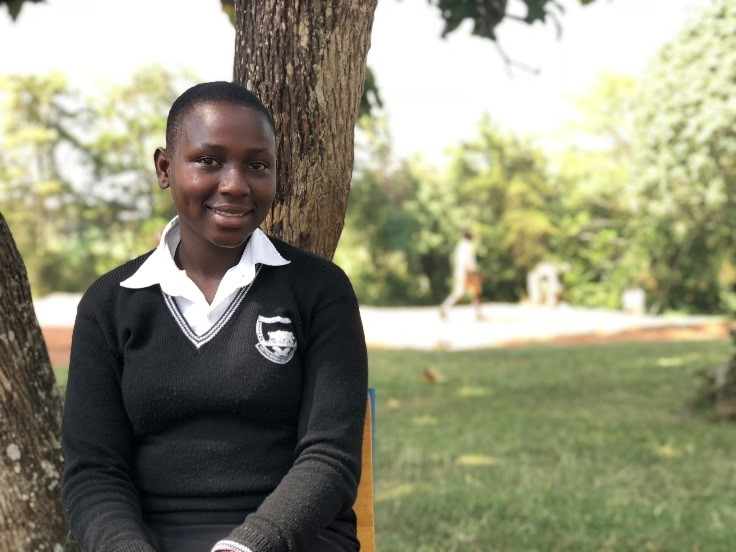 In Uganda, only one in four girls makes it past grade 10. Once out of school, girls are at high risk of HIV infection, violence, early marriage, or pregnancy.

Veronica, 18, was one of the brightest students in her S4 grade level. In her first term of S5, she scored high on her exams and impressed all her teachers.

In her second term, things changed. She started skipping school with a friend and started a relationship with a boy who owned a boutique store in Mityana district. He bought her gifts and provided many things that her parents couldn’t. Veronica began spending much of her time there.

One day, a friend saw Veronica there and called her mom. When Veronica went home for the evening, her mom asked where she had been. Veronica denied her mother’s accusations that she was cutting class. Her mother beat her, took her phone, and refused to continue paying for her education.

“Every day she came home and she quarreled and shouted at me,” Veronica said.

Her mother ultimately sent her away to live with her boyfriend, asserting that it was now his responsibility to marry Veronica and pay her tuition. For two weeks, she remained out of school. A teacher finally noticed Veronica’s absence and became concerned. He came to her home and asked Veronica’s mother why she was not in school.

Her mother said, “I have pulled Veronica out of school and she is not coming back. She does not respect me and I cannot support a girl who doesn’t respect me.”

The teacher then reported all of this to the local Stay In School Committee members, who went to Veronica’s home and asked for the mother’s forgiveness on her behalf. Madam Nampeera, the headmaster, begged the mother to allow her back: “She is Supergirl. She is bright. She is empowered. She is open. We wouldn’t wish to lose her,” she said.

Veronica’s mother forgave her for the sake of the visitors, allowed her to live at home, and began to pay Veronica’s tuition, but she harbored resentment towards her daughter. Although Veronica still struggles to maintain a healthy relationship with her mom, she is working hard to stay diligent in school.

Madam Nampeera meets with Veronica individually once a week and counsels her. “Veronica is a free girl,” Madam Nampeera says. “She is not afraid to speak her mind and she is very willing to tell her story to other girls and to encourage them.”

“The DREAMS project has mentored me and empowered me to stay in school. If they were not there, I would have been married right now.” — Veronica

Veronica says that she’s grateful for SAGE DREAMS because she has been empowered to stay in school. She has also been tested for HIV and she knows her status. Further, she has learned how to make sanitary pads and has transferred this knowledge to her sister and friends in the community so they can also make pads for themselves and sell them to generate income.

Inspired by her role model and cousin, who’s a university student in Kampala, Veronica hopes to go to university to study civil engineering after secondary school. Her cousin currently supports her with materials and school supplies and has encouraged her to stay focused on her goals.

Through the DREAMS project, girls like Veronica are able to see a new world of opportunity through education. Across the 151 SAGE-DREAMS schools, 95 percent of the girls identified by the Early Warning System as being at “high risk” of dropping out were retained in school, including the 17 who dropped out and were returned to the school as a result of a home visit.

Educated women have more skills, self-confidence, and are even likely to marry at a later age and have fewer children. At World Vision, we believe that every child is created in the image of God, with unique talents and abilities. Every child deserves the chance to experience life in all its fullness, to dream big dreams, and to realize their God-given potential.

This program is made possible by PEPFAR and the U.S. State Department. Please email Congress today to ask them to prioritize girls’ education when making important decisions about foreign assistance funding this year.