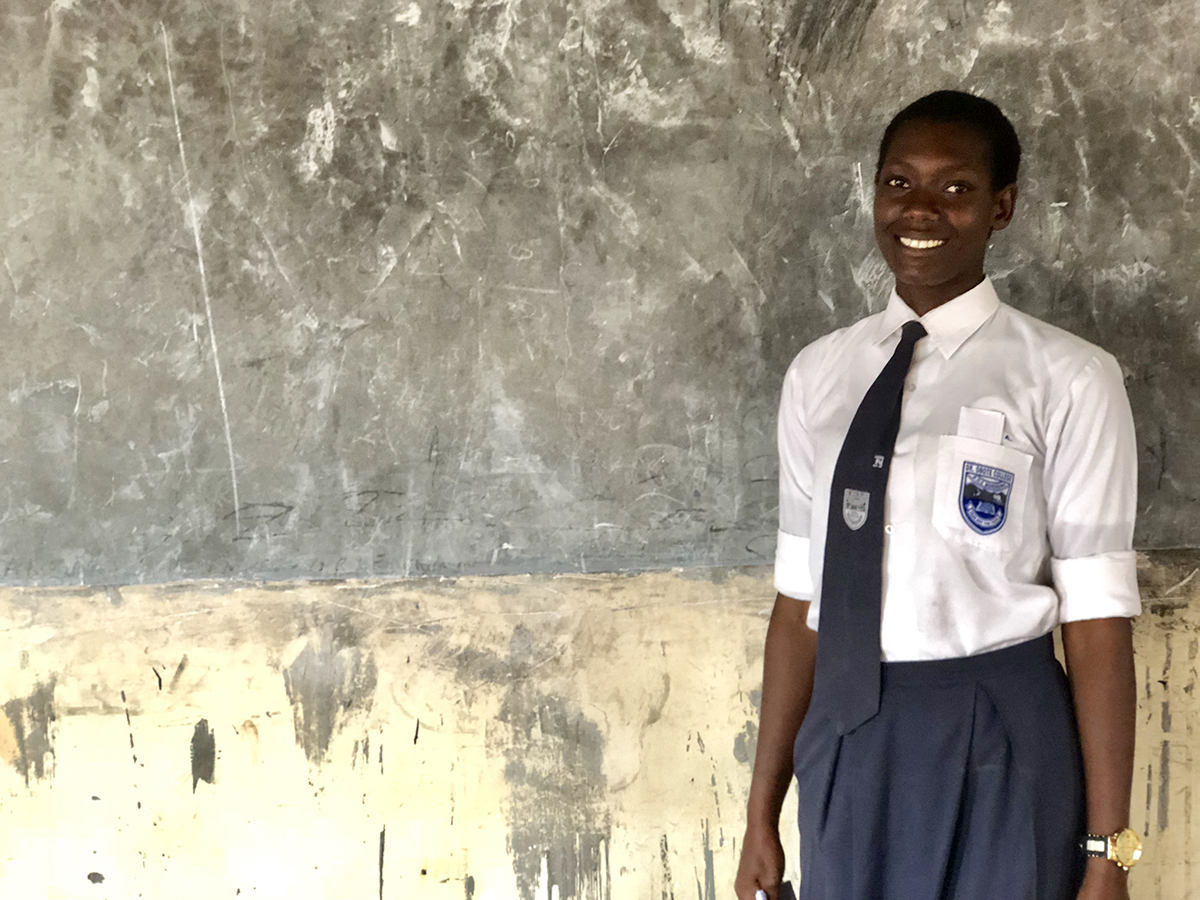 After her father passed away, 18-year-old Pricilia, her sister, and her six brothers were left with their mother, a hard-working woman who sells cereals and other non-perishable items at a storefront in her town in Uganda. Despite their limited resources, Pricilia’s family has always encouraged her education. She is determined to succeed at the highest levels. However, her success has not come without its challenges.

Around the world, only 45 percent of countries have achieved gender parity in primary school and just 25 percent in upper secondary.[1] Disparity in education is overwhelmingly at the expense of girls. In Pricilia’s community, the disparity exists because many parents see more value in educating their male children. Pricilia says that girls are often left at home to help with housework or to care for younger siblings.

Many girls also fear the walk to school and the harassment or even violence they might face on the way. Pricilia recalls the humiliating abuse and harassment she’s received from male students in the school on her way to class, which made it difficult to stay focused on coursework. She noticed that teachers in her school preferred to teach boys and gave them more attention in classes like science and math, even though those were her favorite subjects.

“If you’re not strong or courageous enough, you may not be able to carry on and you may feel education is not worthwhile,” she says.

In a school made up primarily of boys, Pricilia is defying these cultural norms and mindsets that create barriers to equality in education. This year, Pricilia was elected as head prefect of her school. In the 50 years of the school’s existence, this leadership role has never been held by a female student. The head teacher says she has strong qualities and that he himself was moved by her leadership ability.

“I used to not believe in myself,” Pricilia says. But one day, a peer educator trained by the DREAMS SAGE project encouraged her to apply for the prefect role.

“When I saw my name coming out with four other boys, I got scared,” she says. “I couldn’t believe it, but she [the peer educator] was there to tell me ‘you are better off than those boys.’ And it was proven after elections: I won over all the boys.”

This experience has empowered Pricilia. She knows that her voice is important and she has used her role to empower other girls in the school. Through the DREAMS Innovation Challenge project, which aims to prevent HIV among adolescent girls and young women and is funded by the US President’s Emergency Plan for AIDS Relief (PEPFAR) and managed by JSI Research & Training Institute, Inc., Pricilia and her friends have started talking to each other, advising one another, and determining better solutions to challenges unique to the environment of a male-dominated school.

For example, the girls help one another recognize unhealthy relationships with boys. They also encourage each other to stay focused on school and not get distracted.

Pricilia also feels empowered to speak openly to the head teacher about changes that need to be made for girls to thrive in the school. Before DREAMS, there was a problem with the boys coming to the sick bay, which is attached to the girls’ dormitory, and harassing them or making them nervous to come out of their rooms to fetch water. But with the lessons they learned in the DREAMS SAGE program, they approached the head teacher and requested that curtains be put up over the windows and between the sick bay and the dormitory. Now, the girls can be comfortable and relaxed at all times in their rooms.

“DREAMS has taught us that you have to be empowered, to speak for yourself, for no one will speak for you unless you rise up,” Pricilia says.

She and her peers have also taken practical skills from DREAMS – like how to make menstrual hygiene products – into the community. Pricilla and her mother mobilized a group of women and girls in the village and taught them to make sanitary pads for themselves and to sell them in the village.

Pricilia shares her story with friends and neighbors in the village who might be hesitant to send their daughters to school. Her experience of academic success and achievement demonstrates to others the importance of keeping a girl in school and the possibilities that exist for educated women and girls. After completing secondary school, Pricilia hopes to go on to university and continue to share this message across her country.

“My dream is to become the first female president of this country,” she says. “We can do better than those men. We need to come up and show the world that we are better.”

Through the DREAMS project, girls like Pricilia are able to see a new world of opportunity through education. Educated women have more skills, self-confidence, and are even likely to marry at a later age and have fewer children. Cross-country studies show that an extra year of schooling reduces birth rates among adolescent girls by 10 percent.

At World Vision, we believe that every child is created in the image of God, with unique talents and abilities. Every child deserves the chance to experience life in all its fullness, to dream big dreams, and to realize their God-given potential. Below, you have the chance to speak up about the importance of educating and empowering women and girls globally. Ask your representative to support the Keeping Girls in School Act!

Featured photo: Pricilia is a student in the DREAMS program in Uganda. Participating has encouraged Pricilia to continue her education.

This blog was funded by a grant from the United States Department of State as part of the DREAMS Innovation Challenge, managed by JSI Research & Training Institute, Inc. (JSI) and implemented by World Vision. The opinions, findings, and conclusions stated herein are those of the author and do not necessarily reflect those of the United States Department of State or JSI.