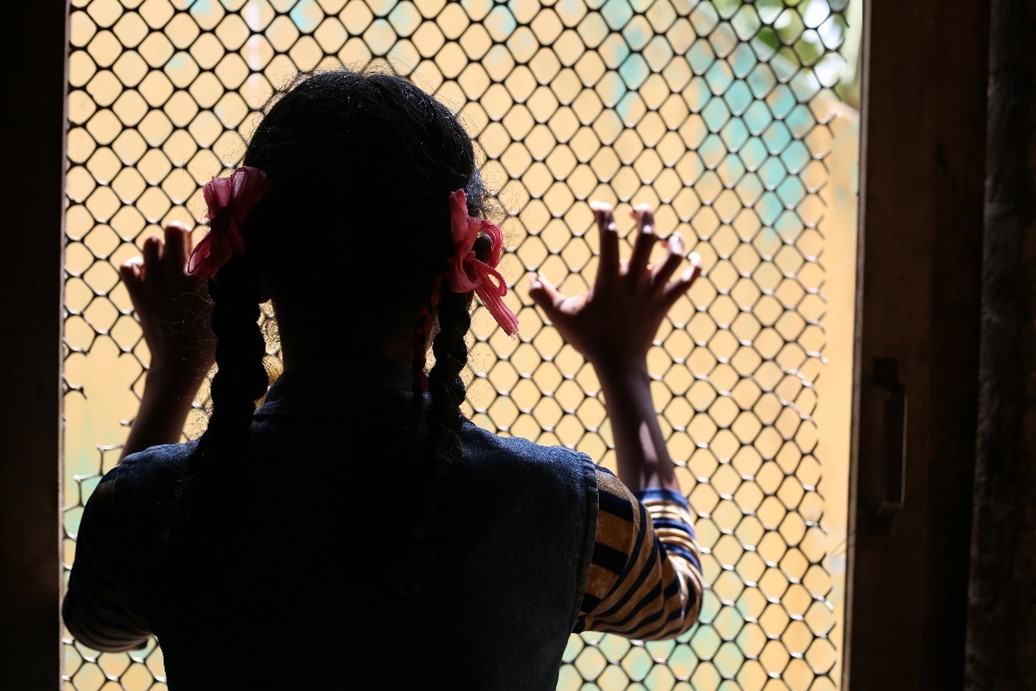 Girls and young women who escape gender-based violence, especially in the case of sex trafficking, face a difficult journey. In India, some face social stigma because of what happened to them. Many remain at risk of being trafficked again, especially if they live in poverty. They may not have access to social support networks to help them heal after what they experienced.

Despite this, the girls in the stories shared here decided to help protect others from trafficking. They wanted their peers to reach safety, too, and they took action to help make it happen.

Their stories inspire us to keep advocating for the safety of women and girls around the world. They are shared with gratitude for the World Vision staff in India working relentlessly to stop child trafficking and, above all, for the girls themselves who wanted their stories to be heard!

Sisters make a scene to keep a girl safe

Alisha and Salima are more than survivors, they are powerful advocates. At ages 16 and 17, they were trafficked to a location far from their home, where they endured severe physical, mental, and sexual abuse. Their phones were taken from them so they couldn’t communicate with family. At one point, Alisha overheard one of their traffickers talking about selling the girls to Nepal. Desperate, she managed to get a mobile phone and call police. Thanks to police intervention, they were rescued with nine other girls and returned home.

But once home, instead of being welcomed, they were shunned. The other girls in their community were not allowed to talk to them. People gossiped about them. Their school refused to allow them back in.

Thankfully, Alisha and Salima found a safe place where they could receive mental health support to heal, as well as training on how to prevent child trafficking, in World Vison’s survivor support group. They’d already suffered horrifically, and many in their place would have chosen to focus on their own healing and safety. But when they saw another girl in trouble, they decided to take action.

At the train station on their way to visit a relative one day, Alisha and Salima noticed a woman with a girl of about 14 at her side. They watched as the girl was handed over to a man. The man could have been a family member, but the way the girl was reacting made Alisha and Salima suspicious. They knew what to look for, and they knew what was at stake if no one intervened.

The sisters kept watching. The young girl’s body language made it clear she didn’t want to go with the man. She was crying, but the woman who had brought her was trying to coax her into cooperating by offering her chocolates. When the man gave the woman money, Alisha and Salima’s suspicions were confirmed.

There were only 10 minutes before the train would leave, taking the young girl and the trafficker out of their reach. The sisters approached the girl boldly and asked what was going on. She was afraid to speak to them, and the man shouted at them to go away, saying that the girl was his granddaughter. Alisha and Salima ignored him. The man grew angrier and told the sisters to mind their own business.

Finally, the sisters told the girl that if she would trust them and tell them what was going on, they could save her. The girl confessed she’d never met the man before. She’d been staying at her aunt’s house, and her aunt said she had found work for her in Delhi, and she would have to go there, despite her protests. She couldn’t contact her parents for help. Alisha and Salima knew that it was dangerous to interfere, but they wouldn’t stand aside.

The sisters managed to pull the girl away from the man. As he attempted to flee, Alisha and Salima shouted an alert to the crowd, causing a ruckus so he couldn’t escape. The police arrived and took the man into custody and the girl was taken home to her parents.

“We are happy to save the girl from the trap of the trafficker,” Alisha said. “We know how much torture a girl has to bear when she is sold for prostitution in a brothel, as we have been through that phase. … After joining World Vision, from the numerous trainings we got, now we know about [child trafficking] and so we are trying our best to save children from falling in [to a] trap and getting trafficked.”

The sisters are working to build awareness about child trafficking in their community. They are on a World Vision child welfare committee, which works to restore trafficked children to their families.

Nakma returns to where she was abused, this time seeking justice

At 16, Nakma has gone through trauma to last several lifetimes. She was kidnapped from her home by two men and sold into prostitution. The men drugged her to keep her from resisting. When she came to her senses, she begged to be taken home, but her captors said they would kill her if she shouted or cried.

She was taken to a flat and sexually abused before being sold and moved to a brothel where she was used for commercial sexual exploitation. Her misery and abuse lasted for at least three months. Nakma was sold seven times to different brothels.

Nakma knew her father’s phone number and finally got a chance to call him and tell him what had happened. Her father made a police report and gave Nakma the number to the police station so she could share her location. But when she called, the police told her they would not be able to rescue her. It was too dangerous.

Nakma was then sent back to the flat where she had first been taken. There, she found a way to escape while her captors were sleeping. She ran to a bakery and asked to use a phone. She contacted her father and told him where she was so he could rescue her.

Back at home, Nakma joined a World Vision survivor support group where she began her healing process. But she decided that she wanted to do more: She wanted justice. In her support group she had learned about the laws against trafficking, and she knew she could help secure freedom for the girls who were still trapped. She went to the police, shared her story, and told them she was ready to lead them to the brothel where she was trafficked and identify her traffickers.

Police and trained World Vision child protection staff members accompanied Nakma to the place where she was exploited. Because of her bravery, police busted one of the biggest trafficking organizations in the area, one that had been trafficking girls between Bangladesh and India for years. Nakma pointed out her traffickers via surveillance during the raid and two were arrested and taken to Kolkata for further investigation.

Survivor goes into a brothel to rescue her friend

Poverty makes children more vulnerable to trafficking. They are more susceptible to false promises of work and new opportunities, and their families have fewer resources to look for them if they disappear. Such was the case for Payal, whose father left the family when she was young. A trafficker took advantage of her vulnerability and sold her into prostitution.

Poverty makes children more vulnerable to trafficking. They are more susceptible to false promises of work and new opportunities, and their families have fewer resources to look for them if they disappear. Such was the case for Payal, whose father left the family when she was young. A trafficker took advantage of her vulnerability and sold her into prostitution.

After she was rescued, she was returned to her family and enrolled in a World Vision survivor support group. There, Payal grew as a leader and began looking after other girls who were at risk. She learned that girls have rights and that there are resources available if those rights are violated.

Payal became worried about a young woman in her survivor group who was acting strangely. Upon investigation, she discovered the woman had been forced into prostitution by her own husband, who had racked up huge gambling debts. He saw his wife as the only way to pay his debts, and had been selling her to a local brothel. He told her that he would kill her if anyone found out, which is why the young woman hadn’t shared with Payal or the group.

When Payal found the woman in the brothel, she pulled her aside, trying to figure out what had happened. At first, the woman would say nothing. But Payal kept encouraging her to speak until the woman felt safe enough to confess what had happened and ask for help.

Payal went straight to the brothel owner and explained that the woman was being held there illegally and against her will. Payal warned that the woman was now being protected by Payal’s survivor group, and if anything were to happen to her, the group was willing to go to any extent to save her. The owner understood that Payal meant business, and the woman’s husband was thrown out of the brothel and the survivor reunited with her parents.

“I am so happy that [I] am able to save my group mate and take her back from this hell,” Payal said. “I know how a girl has to work days after days without her will … . Dead seems to be better than being in this situation. … I have learnt from World Vision that no matter what happens in life, it’s never too late to start again and do better things … .”

Lift our voices together against trafficking

Being an advocate wasn’t easy for Alisha and Salima, Nakma, and Payal. It was likely a painful reminder of their own experiences. But they valued the freedom of others too highly to stay quiet.

We can be advocates, too. We are called to speak out for others in the Bible (Proverbs 31:8). Our advocacy may look different, but every time we speak up for others, we share hope and answer God’s call.

Our voices are stronger when we lift them together. Join us by advocating for the Safe From The Start Act: a bill that will aim to prevent gender-based violence in humanitarian crises, protect survivors or those at risk, and support women in leadership and decision-making roles.